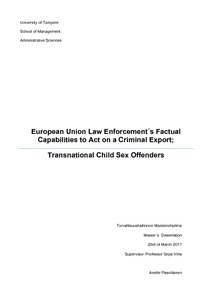 Transnational child sex offending is a matter that falls in between different crime categories. Cooperation countering child sex offending at international or European level is often steered with the idea of using ICT for the exploitation, sharing material produced of the physical abuse, which is not necessarily the case in this crime area, though may be, for example in so called streaming cases. Trafficking in children can also have a bearing on this crime. These cross-overs, amongst other things can create a gap or difficulties in steering police actions to countering the crimes committed by Europeans against children living somewhere else.

Studies have been executed and projections have been given on the ecosystem and crime figures touching upon this form of transnational offending; however, there is neither much addressing the role of law enforcement and police in this context, nor on their actions. Police actions depend directly on the chosen strategies, what is deemed important, and what is less so. National situation data is a needed reference point, and the strategic steering of the police is vital for understanding the Pan-European capacity to act. Interviews of leading national police specialists from EU Schengen States can shed light on these questions - at least to some extent.

The results of the study were not surprising, and did not contradict the public image one has of this crime in the EU. Only a few cases are investigated, and many foreign child victims remain unidentified and without compensation - even in cases where the offender is known. There is some strategic management focusing on countering this specific crime area, but the focus is on the cyber context. Some countries put more effort into the investigations and have more cases than others. For the Pan-European approach more direction of the EU MS was requested.