Supporting the peace mediation efforts of religious leaders : an empirical study of co-operation between Finnish NGOs and the Ministry for Foreign Affairs of Finland 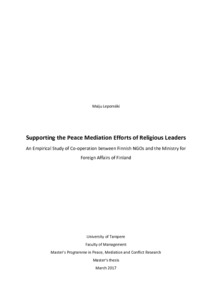 The complex, protracted nature of contemporary conflicts poses increasingly significant challenges to the resolution of armed conflicts. Traditional peace mediation has proven largely inefficient in responding to the modern security challenges presented by conflicts revolving around religious and ethno-political affiliations or other issues related to perceptions of group identity. As new strategies of addressing these modern security threats have become necessary, the field of mediation has witnessed a growing emphasis on localised mediation and local ownership of peace processes, often spearheaded by non-official diplomacy. The conventional ideal of neutral, outsider third parties is more and more often replaced by new types of insider mediators. These include local religious leaders, whose mediation capacity is seen as rooted in the trust and credibility they enjoy in their communities.

The increasing global attention on the peace efforts of religious leaders has also been highly visible in Finland, which has begun to promote the work of religious peacemakers as part of its mediation policy. In light of this shift, the thesis set out to study how Finnish diplomats and non-official practitioners view the role of religious leaders, how the NGOs support the peace efforts of religious leaders and how the Ministry for Foreign Affairs of Finland (MFA) supports this work. In order to do this, the study conducted an empirical study of the work of three Finland-based non-official organisations (NGOs) active in the field: Finn Church Aid, the Network for Religious and Traditional Peacemakers and the Finnish Evangelical Lutheran Mission. It also studied their co-operation with the Ministry for Foreign Affairs of Finland and the effect of this collaboration on each party. This was done through the qualitative analysis of semi-structured interviews and written project documents, which were examined through the framework of conflict transformation, focusing specifically on John Paul Lederach s peacebuilding pyramid and Andrea Strimling s model of co-operation between official and non-official diplomats.

The study found that despite certain differences of opinion regarding the type of religious leaders that can most effectively advance peace, the mediation experts from both the MFA and the NGOs have a similar view of the strengths and the general role of religious leaders in peacemaking. It argued that the NGOs play a central role in connecting local religious leaders to other actors, including states and international organisations. It also concluded that the NGOs' work has benefited from their co-operation with the MFA, which has similarly profited from its co-operation with the NGOs. The thesis found that, in addition to the growing acknowledgement of the importance of multi-track co-operation in the field in general, this partnership has been enabled by certain context-specific factors, such as the parties' similar or non-conflicting interests and goals, an existing structure of co-operation between the state and civil society, professional cultures that do not pose significant challenges to co-operation, mutual recognition of the power-related benefits of co-operation and strong working relationships between individuals.