Structuralism revisited : a comparison between Robert Brandom and Jacques Lacan on the nature of meaning 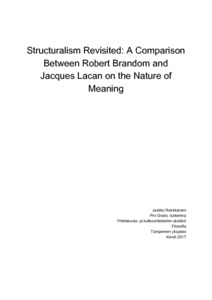 In this work I compare select aspects of two philosophical systems of thinking in an effort to disclose unexpected and theoretically fruitful connections, resemblances and ideas. The systems in question belong to the authors Robert Brandom and Jacques Lacan. The tradition I believe them to share could be called semantic structuralism. Roughly speaking this could be defined as the idea that in order to explain the phenomenon of linguistic meaning, our main recourse should be to the structures inherent in language, and not only or in the first place to relations transcending language.

The task ahead is built on the three substantial middle chapters. Chapter 1 begins by providing initial motivation for the work's major aims, as well as specifying those aims. In Chapter 2 I lay the groundwork for the comparison between Brandom and Lacan, which involves explicating two fundamental approaches possible for semantic theory. In Chapter 3 I expound on Brandom's side of the matter, especially on his inferentialist theory of meaning, which could be rightly called structuralist in orientation. In Chapter 4 I switch over to Lacan, arguing first how his general views on language share decisive similarities with Brandom s, second what those similarities in closer inspection consists of. Lastly, Chapter 5 offers conclusions and possible routes for further study on the subject.