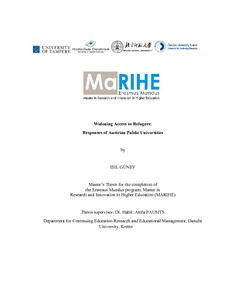 Europe has been a scene of mass migration unparalleled in scale since the World War II in the last couple of years. With the recent migration flow, higher education institutions have confronted with the new challenge of managing a diverse student body from refugees and asylum seekers. Likewise, refugee and asylum seeking students have encountered various barriers in accessing higher education. Whilst significance of higher education for refugees is well-documented in the literature, higher education has not been prioritized for international support and education of refugees has received little attention until recently.

Being one of the main transit countries for refugees, Austria has received approximately 90.000 asylum applications in 2015, an increase of 200% as compared to 2014, which is equivalent to about 1 percent of country's population. While policy discussions in Austria have revolved around handling the refugee crisis and offering humanitarian aid, the role of higher education in integrating refugees has not yet been considered by the policy side. In this context, the aim of this study is to analyze how the Austrian higher education system is responding to including refugees and asylum seekers and what policies and strategies they are adopting to this end. The study adopts qualitative methodology, and employs documentary research and interviews as data collection tools. Data were collected through semi-structured interviews from various stakeholders representing Austrian higher education system; universities, students, student unions and analysis of the official documents "Leistungsvereinbarung" (performance agreements) of public universities.

Findings reveal that language, funding and lack of documentation constitute major obstacles for refugee students' access to higher education. While efforts are being exerted by individual universities and NGOs to meet immediate challenges, funding and support from the policy side of higher education remain scarce. Thus, a concerted national action plan for education of refugees is needed.