Feasibility of the OI-FI to measure the process and outcome of the Finnish maternity care: A comparison between Finns and migrant women of Russian, Kurdish, and Somali origin 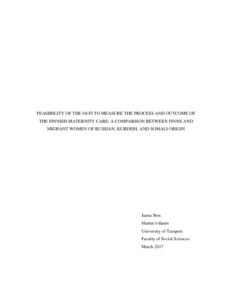 Background: Pregnancy and labor are a natural continuum for life. However, over the past decades different procedures affecting the natural process of pregnancy and labor have become common. Although in many situations these procedures are beneficial to the health of the mother and the fetus, yet they are applied without a medical indication. In today's maternity care, adverse events in pregnancy and labor are rare in countries with high quality health care. At the same time, research detecting these adverse events has become expensive. In the beginning of the new millennium, started a development process of the Optimality Index-US (OI-US), a measurement tool that assesses the process and outcome of maternity care in low risk population. The OI-US offers a new way of measuring perinatal outcomes with a framework of optimality, shifting the perspective from illness to health. The OI-US consists of two indexes, Perinatal Background Index (PBI), and Optimality Index (OI). The PBI describes the social, medical, and obstetric status of the woman. It is detecting the equivalence or difference between the compared groups. The OI measures the particular practice as it concentrates on present pregnancy and labor. The total score of the OI-US is reported with describing the similarity or difference between the groups by the PBI score. The current OI-US contains 56 items.

Data and methods: The work started by adapting the items proposed in the OI-US that were collected in the Finnish MBR, a national register on births. Every item that was included in the OI-FI was referred by Finnish national guidelines or high quality research. The limits for the optimality for each of the item were justified primarily by national guidelines. In the absence of national guidelines, high quality research and evidence-based practice was cited. In total, 40 items were included in the OI-FI. The study sample contained 1,495 women with singleton deliveries in Finland between the years 2004-2014. For each of the woman the latest birth between the study years was under investigation. The study sample was divided by parity to primiparous (n=358) and multiparous (n=1,137) women, and further by ethnicity to four groups: Finns, Russian, Kurdish and Somali. The PBI, OI, and OI-FI scores were calculated for each group and the scores were compared within parity. Finns were used as the reference group. Kruskall-Wallis H test was used to detect statistically significant difference in OI-FI, PBI and OI scores between the study groups. To identify the groups that differ, a pairwise comparison was performed by Mann-Whitney U test. Additionally, optimal responses to each of the items in the OI-FI were calculated. Chi Square test or Exact test was used to detect the items that differed between the study groups. To identify which groups had a statistically significant difference a z-test with adjusted p-values by Bonferroni method was executed. IBM SPSS Statistics 23.0 was used as the analyzing software and the level of statistical significance was set to p ≤ 0.05.

Conclusions: This study repeated the unfavorable trend of Somali women having poorer pregnancy and labor outcomes compared to Finns, and the results are in accordance with previous research conducted in Finland comparing the pregnancy and labor outcomes of Finnish and migrant origin women. Somali women had lower PBI, OI, and OI-FI scores in all the comparisons with Finns, except for OI scores for multiparous. Additionally, Somali women had lower percentages for single item optimality for several items compared with Finns. In addition, multiparous Kurdish had poorer PBI and OI-FI scores compared to Finns. Based on the study results, it seems that the OI-FI has a potential to detect differences in the process and outcome of the Finnish maternity care between Finns and ethnic minority women. This encourages to continue the development of the OI-FI and to use it in future research to evaluate the Finnish maternity care.