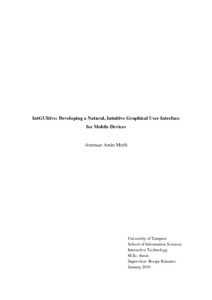 Daily life has experienced a sudden increase in mobile device usage. One needs to only look around to find several tiny devices packing power and function. This is all thanks to exponential advances in technology in recent years; each year technology companies around the world introduce their products; smaller, lighter, faster - state of the art. However, as these devices increase, so do their users and contexts of usage. People use them more and more in different situations, on the move, with different styles, tastes and constraints, such as time. In these cases, using a device whose interface is complicated, cumbersome and non-intuitive, ends up costing precious time and perhaps money, and most definitely causes frustration.

There has been much research into this field of design, called by various phrases but perhaps best summed up by the term "user experience" or "UX". Several concepts within exist, such as gamification, haptics and natural user interfaces, or NUIs. Native system applications of today's mobile devices do not seem to be very intuitive or easy to use as they get more and more complicated. This research attempts to provide a solution to that problem by focusing on depth perception and a novel way of designing a user interface that provides said depth as the user navigates the system and through applications. The metaphors of a camera zoom lens, a rifle scope and binoculars are loose inspirations which form the basis for the prototype application developed.

Despite the prototype application lacking many features due to time and technical factors, the user study revealed highly positive results, with users enjoying the intuitive and natural feel of the new design. Users also expressed a great interest in using an application with such an interface in the future with improvements and thus have prompted further research, proving that such a design opens up endless possibilities for improvement in an otherwise stagnant field.