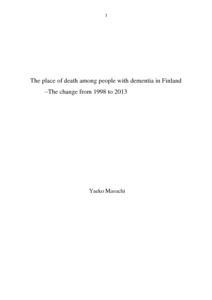 Background: The prevalence of dementia has been expanding largely and quickly among the developed countries. The increasing prevalence of dementia is a significant problem, especially since there is currently no cure available for this disease. Dementia is the most prominent disease among older people associated with a loss of independent function and autonomy, which affects not only the patients but also their family members. Dementia becomes an important cause of disability and death worldwide. The quality of care toward and at the end of life care has discussed to be improved for benefits of not only people with dementia but also caregivers alongside the increasing prevalence of dementia in the older population. The place of death is suggested as a quality indicator for the end-of-life care. Finland is growing old most rapidly among EU countries. Details of the place of death for people with dementia in Finland have not been reported yet.

Aims: The aim of this study was to reveal where people with dementia die in Finland, and what extent the frequency of different places of death has changed over time.

Methods and Results: Descriptive analysis and logistic regression analysis were done using the IBM SPSS statistics. During the study period, the frequency of dementia increased from 22% to 33.9%. Men with dementia died more often at an earlier age (aged 70-79) than women who died more frequently at a later age (aged 90+). During the study years 1998-2013, the most frequent place of death was the primary care hospital (i.e. the health center), followed by nursing home and sheltered housing with 24-hour assistance. Dying at home or specialized hospitals was rare. During the study years, dying in the hospital decreased. Dying in the long-term care facility increased. The sheltered housing with 24-hour assistance became a more frequent place of death in Finland.

Conclusions: Trends in places of death has changed from institutional care to outpatient long-term care in Finland last decades. Death at home and specialized hospitals for people with dementia remained infrequent in Finland. Even nearly half of people with dementia died at the primary care hospital, but recently the trend of dying at long-term care facility, especially sheltered housing with 24-hour assistance increased in Finland.