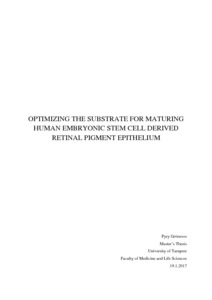 Background and aim Retinal pigment epithelium (RPE) is a monolayer, which lies on Bruch's membrane (BM) between neural retina and choriocapillaris. RPE has very important role maintaining vision and protecting underlying tissues. Age-related macular degeneration and other retinal disorders are often caused by RPE dysfunction, and there is no effective treatment available for them so far. However, human pluripotent stem cell (hPSC) derived RPE cells can be transplanted to damaged retina providing a potential new treatment. Before heading to clinical applications, further research and optimization is needed. To mature hPSC-RPE cells successfully in vitro, the substrate and environment must mimic the natural extracellular matrix such as BM. This study pursued to optimize the best substrate for maturing hPSC-RPE cells using different coating protocols, materials and proteins. The aim of this project was to find better coating method for previously used one, which has unsatisfactorily supported hPSC-RPE attachment, proliferation and maturation.

Methods There were two major phases in this study. First, laminin 521 (L521) was coated with Langmuir-Schaefer (LS) method on polyethylene terephthalate (PET) and polyimide (PI) membranes. The successfulness of the coatings and L521 polymerization was investigated with immunostainings. Next, hPSC-RPE cells were passaged to the coatings and their attachment, spreading and pigmentation were observed for eight weeks. Finally, the cells were characterized with immunocytochemical stainings using confocal microscope z-stacks. In the second phase, the best substrate was searched with dip-coat (DC) method using collagen type IV (C-IV), L521 and nidogen-1 (Nid) as coating proteins. Different combinations of these proteins were tested on PET inserts. Cells were cultured on substrates 9-15 weeks. Dip-coatings and hPSC-RPE cells were analyzed and characterized as in first phase.

Conclusions LS-technicque turned out to be a potential coating method by polymerizing laminin, but much more research and resources are still needed. DC C-IV + L521 combination was superior compared to simple C-IV and the addition of Nid improves the maturation, however higher amounts of Nid cause adverse effects.