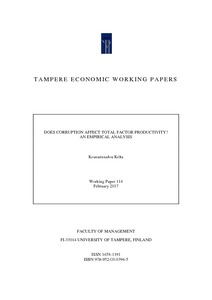 The negative role of corruption in the economies is strongly claimed in economic research. The fact that it undermines economic growth is beyond doubt. Still mixed evidences persist about how corruption reaches growth. This paper examines the effect of corruption on total factor productivity (TFP), also referred to as Solow residual, and assesses the impact related to the increase in tax rates on this effect. The motivation of this study is that volumes of research show that growth of output in a large extent results from growth in TFP. The results of the estimations unambiguously suggest that corruption, well as tax burden, has a negative effect on TFP. When both variables alongside with the lagged dependent variable are used for controlling TFP, the finding suggests that one-unit increase in corruption standard deviation is associated with a decrease of 0.01% in TFP, and the increase in tax burden in the same proportion leads to a decline in TFP of 0.13%. Furthermore, our findings highlight that, a tax rate increase would result an aggravation of the negative impact of corruption on TFP. These findings remain robust to the introduction of TFP determinant variables over alternative regressions.