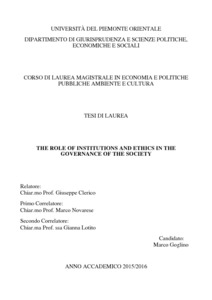 This Master Thesis is divided into four chapters, in which I intended to highlight the trait d'union between these two main topics: Law & Economics and Business Ethics. The first chapter is dedicated to the terminology: I explained, citing the most important scholars e.g. Douglas North and Avner Grief of Law & Economics, the terms proper to this topic, defining the vital difference between formal and informal institutions. In the second chapter, I continued explaining how institutions arise and die out , and how they can interact. Since the social norms influence people's behavior, another focus point of this chapter is how human being can influence the social norms themselves, in order to influence the behavior of other people. The third chapter is totally based on the concepts of Ethics and Business Ethics, and furthermore on their evolution in the economic context. These evolutions started from a total denial, but they led to the creation of numerous theories about the responsibilities of the corporations e.g. the Stakeholder Theory and the Corporate Citizenship which totally changed the way of doing business. The last paragraph on this chapter is about the sustainable development: one of the most important goal of doing an ethical business. The fourth chapter is focused on few practical cases of sensible mutations of institutions, and how different corporations changed their strategies in order to adapt their way to do business, sustaining this new ethic challenge. The first two cases are about two different kind of interaction between social norms and formal institutions: in China and in Europe, social norms, values and beliefs led to the creation of formal institutions and forms of social aggregation (clans and corporations) which totally respected and reflected those values and customs, strengthening them. In Congo, specifically in the Kuba Kingdom, the sophisticated formal institutions, which had provided to spread the good behaviors and conducts between the people, did not influenced in the deep the descendant of this kingdom. The other two cases are about the reactions of two big firms against the evolution of ethics: Nike and Mcdonald's. Two different reaction, that led to similar but deeply different results. Then, the Thesis ends with the conclusions, aimed to underline how ethics is nothing more than an informal institution. This last consideration allows to study its evolutions through the analysis of institutions.