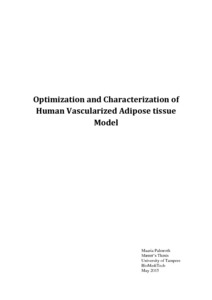 Background and aims: Many adipose tissue related diseases, such as obesity and type 2 diabetes, are already worldwide epidemics. In addition to being energy storage, adipose tissue is an endocrine organ, which is in particular closely associated with vascular system. In order to study adipose tissue and diseases related to it, a wide variety of animal models have been developed. However, the results obtained with these models correlate relatively poorly to humans. Thus, new and more accurate human cell based models are needed. The aim of this study was the optimization and characterization of human vascularized adipose tissue model. The more specific aims were to determine whether adding tubules to adipose tissue model would have a positive effect on the maturation of adipocytes, whether proper vascular structures are formed in the model in the presence of adipocytes and, whether the problem of cell detachment can be solved by trying different cell plating and differentiation schemes.

Methods: Human adipose stromal cells (hASC) and human umbilical cord vein endothelial cells (HUVEC) were cultured as a co-culture on a 48-well plate to mimic vascularized adipose tissue in vitro. Six different cell culturing strategies with respect to cell plating and differentiation schemes were tested. Co-cultures were grown for 14 days and during the co-culture, exposed both to adipogenic and angiogenic differentiation media. After this, triglyceride accumulation was studied with Adipored reagent, the relative cell number with WST-1 reagent and the formed vascular structures with immunocytochemical stainings. Adipocyte specific gene expression was studied with RT-qPCR on the 14th day of cell culture. Triglyceride accumulation and vascular structure formation were observed with a fluorescent microscope. Vascular structures were also studied with confocal microscope and Cell-IQ and the area of vascular networks was quantified.

Results: The cell culturing scheme, in which adipogenesis was induced before angiogenesis, and where cells were plated in two batches at two different days, was the best cell culturing strategy for solving the detachment issue, accumulated triglycerides, expressed adipose tissue specific genes and the morphology of adipocytes and blood vessels was similar to their morphology in vivo.

Conclusions: The results showed, that changing cell plating and differentiation scheme affected the technical repeatability of the model, triglyceride accumulation, vascular structure formation and the genetic maturity of the formed adipose tissue. The vascularized adipose tissue model is a promising tool for adipose tissue research. By thorough characterizing and optimizing the developed in vitro model, it is possible to create a more efficient, reliable and accurate test method than the currently available animal models offer.