Water, not gold : campesinos defining and acting citizenship in the context of mining projects in rural Cajamarca, Peru 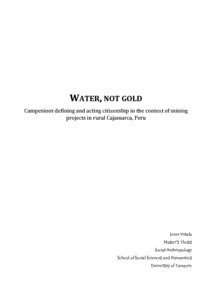 This thesis is an ethnographic study of the political agency of campesinos, rural inhabitants, who live in the area of many large mining projects in the Andean region of Cajamarca, Peru. The main focus is on gold mining projects called Yanacocha and Conga. Yanacocha is currently the largest gold producer in South America, and Conga is a proposed offshoot of the current mine. The Conga project was halted, yet not cancelled in 2011 partly due to local resistance. Since the locals were able to affect halting the project, Cajamarca has become an ideal context to study the strategies of social movements. Also, there is a need for a study that draws attention to the still ongoing conflict and the violations of political rights of the local campesinos. Their experiences are of central importance, because the locals bear the immediate effects of a global mineral trade in their natural and social surroundings. Basing on material collected with a local campesino during two months of ethnographic fieldwork, this study intends to capture those experiences surrounding the gold mining projects.

Using the ethnographic material, I analyse the views of the local campesinos on their political agency. I also investigate how these views are reflected and turned into action in the social movement against Conga and other mining projects. As a theoretical framework, I use conceptions of citizenship, understood as political agency that encompasses local, regional, national and international levels (Lazar 2013). I will also connect citizenship with social movement studies, because social movements, especially in Latin America, are at the global forefront in questioning and shaping understandings of citizenship (Roniger & Sznajder 2012). In short, I analyse, How do the campesinos construct and negotiate citizenship in the context of mining projects in Cajamarca, Northern Peru? This question is further clarified by two sub-questions: How do the locals understand their citizen position in relation to the mining activities? How do they act and use citizenship in the social movement against mining?

The study results in findings of local understandings of citizenship that are deeply rooted in the local bioregion (Nixon 2011), local customs and communality. However, these understandings are processual (Werbner 1998) and imperfect (Clarke et al 2014), and also conflicting ideas were found among the locals. Nevertheless, the social movement against mining in the area has been able to take on these local citizenship imaginaries and bring people together through actions that challenge the economy-based discourse of the mining company and the state. Combining the strengths of already existing local citizen practices, on the one hand, and some tools that the national citizen status provides, on the other, enables social movements to grow stronger in their pursuits.