Why Hume Cannot Be a Realist 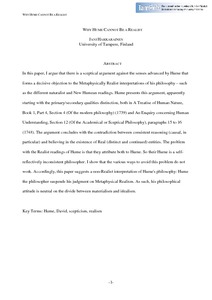 In this paper, I argue that there is a sceptical argument against the senses advanced by Hume that forms a decisive objection to the Metaphysically Realist interpretations of his philosophy – such as the different naturalist and New Humean readings. Hume presents this argument, apparently starting with the primary/secondary qualities distinction, both in A Treatise of Human Nature, Book 1, Part 4, Section 4 (Of the modern philosophy) (1739) and An Enquiry concerning Human Understanding, Section 12 (Of the Academical or Sceptical Philosophy), paragraphs 15 to 16 (1748). The argument concludes with the contradiction between consistent reasoning (causal, in particular) and believing in the existence of Real (distinct and continued) entities. The problem with the Realist readings of Hume is that they attribute both to Hume. So their Hume is a self-reflectively inconsistent philosopher. I show that the various ways to avoid this problem do not work. Accordingly, this paper suggests a non-Realist interpretation of Hume's philosophy: Hume the philosopher suspends his judgment on Metaphysical Realism. As such, his philosophical attitude is neutral on the divide between materialism and idealism.