I aint me no more, nor my house my house no more: la PAH's micropolitics of semiosis & the premises of radical democracy 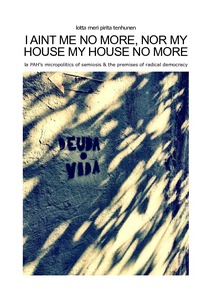 During the years that followed 15M, the 2011 uprising in the networks and plazas of Spanish cities, la PAH has been a groundbreaking example of a multilayer organizational process that has risen to the historical challenge of empowering people to act together in the face of the crisis of representation. The initial letters P, A and H stand for Plataforma de Afectados por la Hipoteca, translated roughly as the Platform of People Affected by Mortgages. As indicated by its name, the movement was founded as an organization for mortgage defaulters. In a conjuncture of rising unemployment and the 'working poor' on one hand, the tide of politicization that swept through the Spanish society in 2011 on the other, la PAH soon grew into a wider movement for the right to housing. Today it continues to evolve, looking to become an even more transversal movement with capacity to criticise and create political pressure within the reigning political system in the wider sense.

This contribution to the study of la PAH, and the grassroots practices of political organisation in general, was born through two years of collective struggle with a local PAH group in the Southern Madrid district of Vallekas. It focuses on the semiotic dimension of collective action as fundamental to the empowerment of its members and the key to the organisational success of la PAH. The semiotic production la PAH carries forth is, therefore, discussed as an intrinsic part of the micropolitics of the group and an important factor in the continuous negotiation of the ethics of collective action. My findings indicate that while these questions are awoken within the partial field of housing politics, they are impregnated with such a subversion that they often overflow into other areas of life of the members of la PAH, making them critically evaluate the society, their relationship with themselves and with the others.

This is, first and foremost, a study born in and from extended participation in the movement and motivated by the idea of helping to localize problems that need to be resolved in PAH itself. Furthermore I hope it will be useful for other groups and organizational processes in the common struggle against global debt governance in their communities.