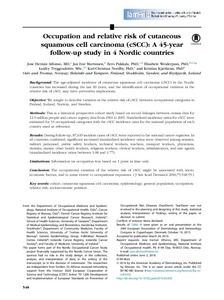 BACKGROUND:
The age-adjusted incidence of cutaneous squamous cell carcinoma (cSCC) in the Nordic countries has increased during the last 60 years, and the identification of occupational variation in the relative risk of cSCC may have preventive implications.
OBJECTIVE:
We sought to describe variation in the relative risk of cSCC between occupational categories in Finland, Iceland, Norway, and Sweden.
METHODS:
This is a historical prospective cohort study based on record linkages between census data for 12.9 million people and cancer registry data from 1961 to 2005. Standardized incidence ratios for cSCC were estimated for 53 occupational categories with the cSCC incidence rates for the national population of each country used as reference.
RESULTS:
During follow-up, 87,619 incident cases of cSCC were reported to the national cancer registries. In all countries combined, significant increased standardized incidence ratios were observed among seamen, military personnel, public safety workers, technical workers, teachers, transport workers, physicians, dentists, nurses, other health workers, religious workers, clerical workers, administrators, and sale agents (standardized incidence ratios between 1.08 and 1.77).
LIMITATIONS:
Information on occupation was based on 1 point in time only.
CONCLUSION:
The occupational variation of the relative risk of cSCC might be associated with socioeconomic factors, and to some extent to occupational exposures.