The formation of competitive balance in the national hockey league 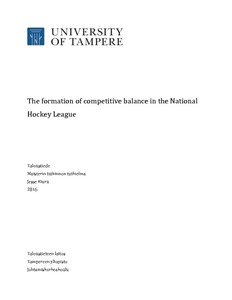 Using empirical data from the NHL website along with relevant studies, I was able to create comparison between the financial competitive balance and the athletical competitive balance. The league utilized a revenue sharing program to address the financial inequalities, but it seems rather inefficient considering the significant differences in the franchise valuations. There are also major differences in the market size and fan base between franchises, which do not create equal possibilities for financial success. On the other hand, the athletical success of each franchise is efficiently taken into consideration. Systems such as the reverse order draft allow franchises to gradually strengthen their competitive balance regardless of their financial situation.