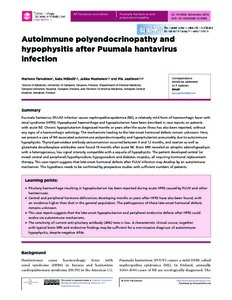 Puumala hantavirus (PUUV) infection causes nephropathia epidemica (NE), a relatively mild form of haemorrhagic fever with renal syndrome (HFRS). Hypophyseal haemorrhage and hypopituitarism have been described in case reports on patients with acute NE. Chronic hypopituitarism diagnosed months or years after the acute illness has also been reported, without any signs of a haemorrhagic aetiology. The mechanisms leading to the late-onset hormonal defects remain unknown. Here, we present a case of NE-associated autoimmune polyendocrinopathy and hypopituitarism presumably due to autoimmune hypophysitis. Thyroid peroxidase antibody seroconversion occurred between 6 and 12 months, and ovarian as well as glutamate decarboxylase antibodies were found 18 months after acute NE. Brain MRI revealed an atrophic adenohypophysis with a heterogeneous, low signal intensity compatible with a sequela of hypophysitis. The patient developed central (or mixed central and peripheral) hypothyroidism, hypogonadism and diabetes insipidus, all requiring hormonal replacement therapy. This case report suggests that late-onset hormonal defects after PUUV infection may develop by an autoimmune mechanism. This hypothesis needs to be confirmed by prospective studies with sufficient numbers of patients.