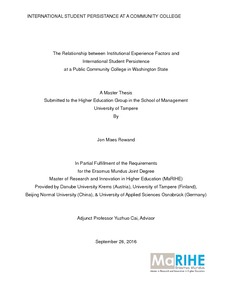 In the 1930s, scholars began examining the forces behind students' decision to persist or depart from higher education institutions. These explorations initially looked at U.S. four-year university contexts, but research has since spread to other high education systems around the world and has demarcated for diverse institutional types, academic programs, and student demographics. Within this area of study there is a small contingent of researchers that seek to better understand persistence trends for international students in higher education. Recognizing that there remains a gap in the literature for international students enrolled at U.S. two-year public higher education institutions, the purpose of this study was to determine what relationships there are between institutional experience factors and international student persistence at a community college in Washington State.

Based on previous models from Tinto (1993), Braxton, Hirschy, and McClendon (2004), and Kwai, (2009), this study's first contribution was a modified conceptual framework specific for researching international student persistence in U.S. community college settings. Institutional experience factors were divided into academic system and social system with variables identified along the lines of four sub dimensions: academic performance, interaction with faculty and staff, campus involvement, and interpersonal relationships. Data analysis revealed that there were statistically significant differences with persisters having higher cumulative GPAs, more frequency of high credit and low credit course loads, and greater participation in the college managed homestay program. Findings for all other variables were deemed inconclusive. From these results, recommendations were proposed for policy and practice, which included systemizing institutional research for the international programs office, digitalizing international student service processes, formalizing pre-arrival/pre-departure orientation, establishing a year-round peer mentoring program, and expanding linked course offerings. Advisement was also given for improvements to the conceptual framework and survey instrument tool as well as a call for a multi-case study design that longitudinally applies mixed research methodologies towards further defining of international student persistence causes and predictors at U.S. community colleges.