The effect of perceived direct gaze on self-focused attention 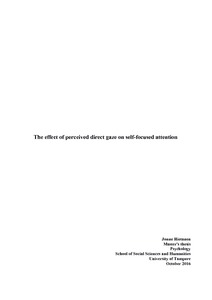 It has long been speculated that eye contact increases self-focus, but the effect has been little researched. Moreover, most of the studies so far have been based on self-report questionnaires, which are problematic due to issues of credibility and reactivity. In the present study, the effect of perceived direct gaze on self-focused attention was investigated with implicit measures.

The self-focus-inducing effect of direct gaze was examined with a video stimulus. Participants were instructed to imagine that the person in the video was a real person sitting opposite to them. Self-focus was measured with a novel latency-based measure, and an implicit pronoun-selection task, in addition to a commonly used self-report measure of self-focus. The participants were randomly assigned to either a direct or an averted gaze group, and their scores on these measures were compared. Self-focus was found to be higher for those in the direct gaze group as gauged by the latency-based measure. The results on the pronoun-selection task did not differ between the groups. Furthermore, the self-reported awareness of one's internal states was found to be heightened in the direct gaze group.

The results suggest that the perception of a direct gaze increases self-focused attention. The perception of a direct gaze without being observed seems to increase introspective self-focus, whereas mutual eye contact with a live person is known to increase the awareness of one's appearance. As introspective self-focus is associated with an increase in the salience of emotions and values, the results have implications for certain forms of communication, such as campaigning or advertising.