Pessimism and risk of death from coronary heart disease among middle-aged and older Finns: an eleven-year follow-up study 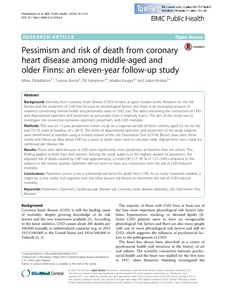 BACKGROUND:
Mortality from coronary heart disease (CHD) remains at quite notable levels. Research on the risk factors and the treatment of CHD has focused on physiological factors, but there is an increasing amount of evidence connecting mental health and personality traits to CHD, too. The data concerning the connection of CHD and dispositional optimism and pessimism as personality traits is relatively scarce. The aim of this study was to investigate the connection between optimism, pessimism, and CHD mortality.
METHODS:
This was an 11-year prospective cohort study on a regional sample of three cohorts, aged 52-56, 62-66, and 72-76 years at baseline (N = 2815). The levels of dispositional optimism and pessimism of the study subjects were determined at baseline using a revised version of the Life Orientation Test (LOT-R). Eleven years later, those results and follow-up data about CHD as a cause of death were used to calculate odds. Adjustments were made for cardiovascular disease risk.
RESULTS:
Those who died because of CHD were significantly more pessimistic at baseline than the others. This finding applies to both men and women. Among the study subjects in the highest quartile of pessimism, the adjusted risk of death caused by CHD was approximately 2.2-fold (OR 2.17, 95 % CI 1.21-3.89) compared to the subjects in the lowest quartile. Optimism did not seem to have any connection with the risk of CHD-induced mortality.
CONCLUSIONS:
Pessimism seems to be a substantial risk factor for death from CHD. As an easily measured variable, it might be a very useful tool together with the other known risk factors to determine the risk of CHD-induced mortality.