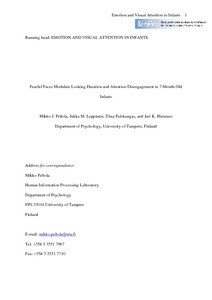 Developmental Science 11 1
60-68
This publication is copyrighted. You may download, display and print it for Your own personal use. Commercial use is prohibited.

The present study investigated whether facial expressions modulate visual attention in 7-month-old infants. First, infants’ looking duration to individually presented fearful, happy, and novel facial expressions was compared to looking duration to a control stimulus (scrambled face). The face with a novel expression was included to examine the hypothesis that the earlier findings of greater allocation of attention to fearful as compared to happy faces could be due to the novelty of fearful faces in infants’ rearing environment. The infants looked longer at the fearful face than at the control stimulus, whereas no such difference was found between the other expressions and the control stimulus. Second, a gap/overlap paradigm was used to determine whether facial expressions affect the infants’ ability to disengage their fixation from a centrally presented face and shift attention to a peripheral target. It was found that infants disengaged their fixation significantly less frequently from fearful faces than from control stimuli and happy faces. Novel facial expressions did not have a similar effect on attention disengagement. Thus, it seems that adult-like modulation of the disengagement of attention by threat-related stimuli can be observed early in life, and that the influence of emotionally salient (fearful) faces on visual attention is not simply attributable to the novelty of these expressions in infants’ rearing environment.