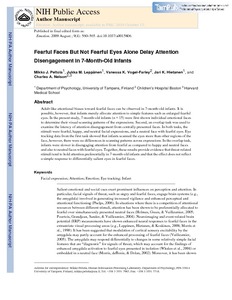 Emotion 9 4
560-565
This publication is copyrighted. You may download, display and print it for Your own personal use. Commercial use is prohibited.

Adult-like attentional biases toward fearful faces can be observed in 7-month-old infants. It is possible, however, that infants merely allocate attention to simple features such as enlarged fearful eyes. In the present study, 7-month-old infants (n = 15) were first shown individual emotional faces to determine their visual scanning patterns of the expressions. Second, an overlap task was used to examine the latency of attention disengagement from centrally presented faces. In both tasks, the stimuli were fearful, happy, and neutral facial expressions, and a neutral face with fearful eyes. Eye tracking data from the first task showed that infants scanned the eyes more than other regions of the face, however, there were no differences in scanning patterns across expressions. In the overlap task,
infants were slower in disengaging attention from fearful as compared to happy and neutral faces and also to neutral faces with fearful eyes. Together, these results provide evidence that threat-related stimuli tend to hold attention preferentially in 7-month-old infants and that the effect does not reflect a simple response to differentially salient eyes in fearful faces.