"They've got the bomb, we've got the records!" Roles of Music in the Making of Social Movements: The Case of the British Nuclear Disarmament Movement, 1958-1963 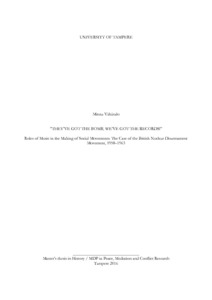 This thesis explores the roles music can play in the making of social movements. The theme is studied through the case of the British nuclear disarmament movement, 1958-1963. The focus is mainly on London and the national level, but the discussion is contrasted with examples from protests in the Glasgow region. By analysing participant perceptions on music, the study answers two main research questions. Firstly, how was music seen to influence the movement, and why? Secondly, how did contemporary musical and political phenomena shape the uses and perceptions of music in protest. The topic is discussed in the context of Cold War cultures in Britain in the late 1950s and early 1960s. This thesis provides an example of how local actors interpreted the Cold War, and responded to it using the cultural and social resources available for them. It also demonstrates how the Cold War influenced the political opportunities and internal dynamics of the movement.

The British nuclear disarmament movement was a mostly non-aligned collection of groups, campaigns, individuals and protests which aimed at unilateral nuclear disarmament by the United Kingdom. In Scotland, the direct goal was the removal of American nuclear weapons from Holy Loch, close to Glasgow in Western Scotland. The movement was politically and religiously heterogeneous, and its groups differed considerably in their choice of methods of protest. In 1958-1963 the movement was at its peak, attracting thousands of people to its protest events.

This study combines an analysis of archival materials and published sources with oral history. The archival sources, collected from the London School of Economics Campaign for Nuclear Disarmament Collection and the Glasgow University Janey Buchan Political Song Collection, consist of documents pertaining to the planning, discussion and reporting of movement activities, correspondence, participant accounts and songbooks and sheets as well as numbers of the Sing magazine. The published sources include books, contemporary records and one short documentary film. The books are accounts of nuclear disarmament activism written from different perspectives, published 1964-1983. The oral history sources consist of four unstructured interviews conducted in Glasgow and in London in February 2015 with six people who participated in the nuclear disarmament movement and two who offered comparative and theoretical insights. The main method of data retrieval and analysis of this study is content analysis.

This thesis argues that music had strong influence on the British nuclear disarmament movement. The functions were mainly sustaining, although music could also reinforce fragmenting processes within the movement. As the worlds of music and activism were connected, new participants joined the movement. Many of them came from political music organisations, often affiliated with the Communist Party. In the movement, however, members of such groups were constantly negotiating their political identifications, and participation in a non-aligned movement also offered opportunities to challenge and transcend Cold War dichotomies and work for peace and disarmament independent from the Soviet-led peace movement.

The participation of musicians led to a development of a musical infrastructure within the British nuclear disarmament movement. This guided the ways in which musicians participated, musicking occured and music was used and transmitted in the movement. In particular, musicians helped in protest events and social gatherings and in mobilising resources for the organisations. Music also affected debates within the movement as organisers discussed the appropriate place, time and content of music. Discussions and disagreements over music reflected the political, social and cultural complexity of the movement as well as the challenges which peace movements faced in Cold War Britain.

Music had considerable influence on the mood, rituals and image of the movement. It motivated activists in protest events and created and strengthened a sense of solidarity between them. This study also shows that individual activists and groups used music to negotiate disagreements and express dissent in the movement. Moreover, the thesis exemplifies how closely interconnected the cultural and the political were in the movement. Activists and musicians recognised this, and they used music to express, perform and reaffirm their political identities.