Resting frontal EEG asymmetry in children: Meta-analyses of the effects of psychosocial risk factors and associations with internalizing and externalizing behavior 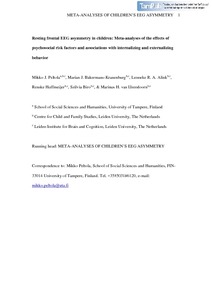 Developmental Psychobiology 56 6
1377-1389
This publication is copyrighted. You may download, display and print it for Your own personal use. Commercial use is prohibited.

Asymmetry of frontal cortical electroencephalogram (EEG) activity in children is influenced by the social environment and considered a marker of vulnerability to emotional and behavioral problems. To determine the reliability of these associations, we used meta-analysis to test whether variation in resting frontal EEG asymmetry is consistently associated with (a) having experienced psychosocial risk (e.g., parental depression or maltreatment) and (b) internalizing and externalizing behavior outcomes in children ranging from newborns to adolescents. Three meta-analyses including 38 studies (N = 2,523) and 50 pertinent effect sizes were carried out. The studies included in the analyses reported associations between frontal EEG asymmetry and psychosocial risk (k = 20; predominantly studies with maternal depression as the risk factor) as well as internalizing (k = 20) and externalizing (k = 10) behavior outcomes. Psychosocial risk was significantly associated with greater relative right frontal asymmetry, with an effect size of d = .36 (p < .01), the effects being stronger in girls. A non-significant relation was observed between right frontal asymmetry and internalizing symptoms (d = .19, p = .08), whereas no association between left frontal asymmetry and externalizing symptoms was observed (d = .04, p = .79). Greater relative right frontal asymmetry appears to be a fairly consistent marker of the presence of familial stressors in children but the power of frontal asymmetry to directly predict emotional and behavioral problems is modest.