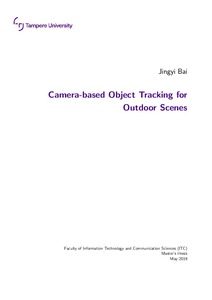 This thesis describes the implementation of object tracking from self-collected dataset. In this work we collect and preprocess data, train the object detection models, implement and compare two multiple object trackers, and draw the object movement trajectory. The performance of the detection model is evaluated based on precision, recall, F1 score, and detection speed, and the performance of the tracker is evaluated by accuracy and completeness of tracking. The challenge in the project comes from the impact of the detection quality of detection models on the tracking capabilities of trackers.

The data is collected from campus scenes and trained on pre-trained models provided by TensorFlow Object Detection model zoo. Experiment shows that Single shot multi-box detector is faster but has lower detection accuracy, Faster region-based convolutional neural network with residual
networks has higher accuracy and performed better on our dataset. Then, we implement two multiple object trackers based on Kalman Filter Tracking and OpenCV Centroid Tracking. Hungarian algorithm is used for both to associate detected object with its new locations in new frames.
The trackers are tested on MOTChallenge dataset for comparison, and the result shows that the performance of tracker with Kalman Filter Tracking is better than tracker with OpenCV Centroid Tracking, which is able to deal with the disappearance problem of the object caused by occlusion or instability of detection model. Finally, we draw the object movement trajectory, which reflects the movement behavior of pedestrians, cyclists and vehicles.

We believe that this project has application prospects in many security fields such as intelligent scene monitoring, pedestrian trajectory prediction in future, but there is still much space for improvement since the limitation of amount of dataset and the great impact of detection quality on object tracking.