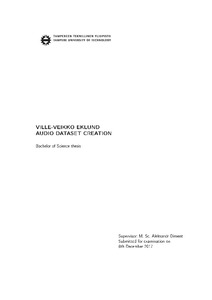 The goal of this thesis was to build an easily accessible and approachable environmental audio dataset for benchmarking machine learning algorithms. The samples in the created dataset were collected from Freesound, which is an online database consisting of sounds uploaded by its users. The dataset consists of three classes, each containing 50 instances of original recordings with annotations for 5-second segments. The classes are 'dog', 'bird' and 'rain', and the dataset was therefore given the name DBR dataset. Additionally, a script for evaluating support vector, random forest and k-NN classifers with the dataset was written. The building and evaluation stages were documented step-by-step and a Jupyter notebook tutorial for using the dataset was created. The dataset, the scripts and the notebook were published online.