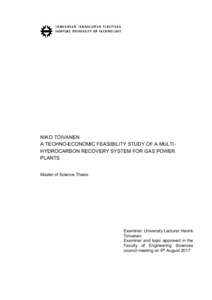 The overall focus of this study was to examine how to recycle the unburned fuel gases from gas power plants back into a usable state, instead of the fuel gas being released into the atmosphere. The research objectives were to critically examine the current system and also to find the most suitable technology for recycling the unburned fuel gases back into the process, both technically and economically. Furthermore, the study examined the benefits of the new system. In the literature, similar systems were already found to be used by different sections of the industry, but never on such a large scale or for the purpose of recycling the fuel gases back into the process. To date, a techno-economic feasibility has not been carried out in relation to this subject. Furthermore, modeling results, which describe the behavior of flammable hydrocarbon plumes in the air, are also not in current literature.

This study chose to techno-economically investigate the current situation, various potentials for development and possible solutions for gas power plants belonging to the particular company used as a case-study. Before and during the study, the planning of one potential system and several different safety studies were conducted. As part of the study, interviews were held, hydrocarbons were modeled, and the Excel-based calculation tool was created to assess economic feasibility. The study was carried out through active, primary research where the researcher worked in the target organization.

As a result, problem areas within the current system were found, proving the necessity of the whole study. A more suitable technology with justifications was found to replace the current system. This type of new system could also be more widely adopted within other sectors of the business and amongst other companies. In this research, various elements of different industry sectors which have appeared in the literature are combined and compared to the author’s own views and according to the results observed.

From the company’s point of view, the state of the existing system and new data results were verified and validated. It was possible, furthermore, to prove the benefits of the new system against the current. Recommendations of this study were continued investment in the development and commercialization of the new system, with a particular focus on the relevant markets and their future, considering tightened rules and requirements from authorities.