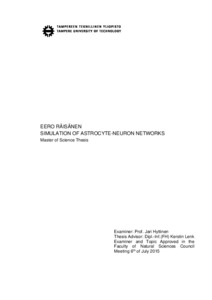 The modern neuroscience aims for more and more detailed understanding of the reasons, which form the basis for search for cure or diseases related to the brain. Today we know that brain consists of multiple different cell types and functional organs ranging from blood vessels to glia cells and neurons. Each cell type has its specific functions which can be for example structural, immunological or signaling.

To study the functions of different living systems, it is often necessary to disturb the normal function to understand the underlying mechanisms. For this reason, methods for avoiding the use of model animals have been developed. One of the tools available for this is in silico modeling of the systems.

For this work, I have developed a computational model of a joint function of two cells types by combining existing models. Neurons form a neuronal network which is modeled using INEX by Kerstin Lenk (Lenk, 2011). The other cell type called astrocytes are modeled by Lallouette’s UAR model (Lallouette, De Pittà, Ben-Jacob, & Berry, 2014) and a near synapse simulator interface together with De Pittá’s presynapse model (De Pittà, Volman, Berry, & Ben-Jacob, 2011). The combined model is called INEXA. We present this simulation scheme in an attempt to model the interactions of astrocyte network and neuronal network.

Eighteen simulations were run to test different stages of the simulator. In phase one, the simulator INEX was run so that neurons had no synaptic strengths to get noise output of the basic activity driving the network. In phase two, Tsodyks-Markram presynapses were added to the neuronal network. In phase three, the presynapse area simulation including local astrocytes was added, and in phase four, the full INEXA was tested with 10%, 20% and 30% of the simulated culture being astrocytes.

The results show that the interconnected simulated astrocyte-neuron networks have properties that induce population bursting behavior while restricting hyperactivity. As such the astrocytes could be related to modulating signaling patterns towards bursting and restricting epileptic behavior.