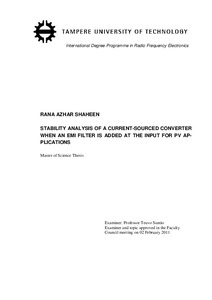 The aim of green energy is to reduce the environmental pollution as well as electromagnetic pollution generated by electronic products. The involvement of power electronics devices in photovoltaic systems brought the aspect of electromagnetic interference which could decrease the efficiency of solar panels. The generated EMI may be radiated to atmosphere or either conducted through the electronic circuitry paths which may harm the performance of other interconnected system. EMI filters are commonly used to reduce the conducted noise emission from the electronic product. In addition, to achieve the immunity from electromagnetic interference, the EMI filters should also be considered in such a way that the stability of the whole system is achieved after insertion of an EMI filter.
There is enough literature available for the implementation of EMI filter at AC side of photovoltaic power plant but not enough work has been done for EMI filters at DC side of PV power plants. This work proposes the approach of installing EMI filters at DC side of current-sourced converters for PV interfacing in solar power plants in such away that the stability of the whole system should not be affected.
Solar cell is naturally considered as a current source, and a current-sourced converter is needed for efficient usage of output current of solar panels including an input EMI filter which should also be a current-sourced to reduce the noise voltage coming from the converter. Control loop is implemented from the input voltage in currentsourced converters so the stability has been assessed at two different points of control loop implementation from the input voltage.
Work in this thesis relies on the dynamical analysis of converter and EMI filter which is carried out by using state-space averaging technique. Different open and closed loop transfer functions are analysed at different operating points of solar panel. The main difficulty in the work was the lack of information regarding EMC standards for DC side EMI filters.