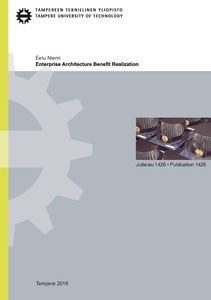 In today’s volatile business environment, organizations need to constantly reshape their operations. Enterprise Architecture (EA) is a promising approach to supporting organizational transformation and providing the necessary agility to respond to environmental changes. Consequently, it has received attention from both academia and industry. In particular, the practical aspects of creating and implementing EA have been addressed in previous research.

Many researchers claim that a multitude of benefits can be realized by EA. These include improved decision making, better alignment of business and IT, and reduced costs. However, the question of how EA creates benefits has received little attention. Only recently have a few models been published on the EA benefit realization process. This refers to a process consisting of several interacting constructs impacting the realization of benefits by EA in an organization, such as EA products (including architecture documentation, i.e., models), different kinds of EA utilization constructs, and social and cultural constructs. Nevertheless, the results are, to a large extent, contradictory and are presented on an abstract level. Consequently, there is no unified view of EA benefit realization.

This thesis focuses on understanding EA benefit realization, taking four different viewpoints on the phenomenon. First, the EA benefit realization process is described on a general level as a data-based model. Second, EA stakeholders are considered to uncover their interaction with EA and their EA-related concerns. Third, EA product and service use (including the utilization of, for example, architecture models and architectural support for development projects) is addressed to discover when, why, and to whom EA benefits actually emerge in practice. Fourth, the measurement of EA benefit realization is scrutinized to form the basis for rationalizing the EA approach and improving EA practice.

The thesis states that EA benefits are realized through a complex process involving several interconnected constructs. There are many stakeholders that interact in the process, having various and even conflicting concerns about EA. EA use is also a complex phenomenon that is heavily intertwined with EA stakeholders, EA products, and services. Concrete measures for the EA benefit realization process constructs are also proposed. The results can be used as a basis of further study, for example, validation of the proposed model. Recommendations for EA practice are also given.

The thesis is article-based and contains six articles. The empirical part of the study is based on a multiple qualitative case study in a large public organization.