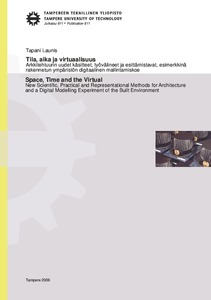 The aim of this study is to prove at a general theoretical level that by means of the notion of the ‘virtual’, we can explain and understand the phenomena of our complex modern society and its living environment in a better way. This notion can be used also at the more specific level in architectural discourse. In this respect, a singular conceptual entity of ‘space, time and the virtual’ was formulated to illuminate certain key questions of contemporary architecture. This thesis demonstrates by these new concepts how we can approach the prevailing problems of modern architecture, develop improved theoretical tools as well as bring new practical methods to actual architectural practice.
The theory of the ‘virtual’ explains spatio-temporal existential dimensions of a human being. Our perceived world appears to us as a continuous singular flow of actualized phenomena from the ‘virtual’, to our perceptual level of immanence. Actualization never proceeds linearly to another new actualization. Actualization is renewed always via ‘virtual’ capacity in a nondeterministic creative way, momentarily in the durations of perceived time. Past, present and future are singularly intertwined and crystallized temporally simultaneously. This can be applied also as an architectural conception, to understand spatio-temporal phenomena better. This vitally human, existential concept can be applied to enrich the traditionally geometrically defined Platonistic-Cartesian concept of the architectural empty ideal space. Architecture appears to us as actualized from the ‘virtual’ with endless multitudes of phenomena of spatio-temporal human experiences. We can justify our achetypal ways of understanding our environment in its richest complexity, contents and meaning, strong and weak, solid and ephemeral virtues.
The concept of the ‘virtual’ evokes scientific-philosophical questions, which are rooted deeply in the archetypal archaic tradition of human thinking and existential considerations. By following this tradition from ancient to modern times we can trace a long unbroken path. In this study, specific attention has been focused on following the notions of ‘place’, ‘topos’ and ‘space’. These old archetypal, often spiritual, notions were eventually defined more rationally and finally scientificly as a “space-time” concept, and then filtered also into the theoretical discourse of modern architecture. By following this historical survey we can better comprehend the theoretical concepts of modern and contemporary architecture, evaluate and re-evaluate it. For instance, the Platonistic-Cartesian concepts, and the theoretically thin modernistic explanations for the questions of contemporary architecture can be improved to have more comprehensive and profound human meaning and contents. Especially the Aristotelian tradition has been influental in this respect. As a matter of fact, the concept of the ‘virtual’ was invented by ancient thinkers, refound and redefined by Bergson and later Deleuze and other post-modern philosophers.
The notion and the word ‘virtual’ has been used nowadays mostly in the world of new IT-, network- and media oriented technology. The empirical experiment of this study is a good example in this respect. However, the word ‘virtual’ can be used in the connection of the ‘virtual technology’ and can then be drawn also to the more general level and have other connotations. There is no controversy in this respect.
New virtual modeling technology and media- and network-oriented technology was tested and evaluated in this study by means of the digital 3D-modeling of the Tornio old town environment. This experiment was also a platform for empirical testing of the theoretical aspects of this dissertation. It was proven that the recent digital-geometrical methods in 3D-modeling can be improved by using new elements of virtual technology with network and media contents. Regardless of the technical shortcomings of practical tools and equipment available, the experiment succeeded quite well. Also certain advanced aspects of virtual technology, like immersiveness and interactivity as well as other features to simulate human perceptional responses within this kind of technological solution were tested.
Methodologically, we can create vital links and interactivity between theoretical thinking on a general level and technologically and pragmatically emphasized practical work. By means of this hernemeutic method, we can utilize interactive comparisons between different hierarchic evaluation levels. Such a methodological procedure was carried out also in this study. At a general level, the concept of the ‘virtual’ has been studied in its wider scientific-philosophical context, and compared and studied at the architectural level as a notion of ‘space, time and the virtual’ and finally at the practical detailed technical level by a means of the empirical experiment of this study, 3D-’virtual model’ of the Tornio old town.

Some specific problematic questions have appeared during these studies. The omnipotent Cartesian “subject-role” of modern man, along the ethos of the Enlightenment, is a typical attitude in modern world. This should be re-evaluated and enriched by a more compassionate approach. The objects and elements of a natural and built environment shall be given full rights to exist and justify their autonomous existence. Their ‘genius-loci’ properties should be listened to and respected. In this way the full capacity of an actualizing process of spatio-temporal phenomena can be achieved, enjoyed and utilized in a healthy way. By this kind of approach we could have a co-existential balance and relationship with our environment as well.
We can create a wider and deeper, more profound ethos for administering, developing, designing and building our living environment and keeping the balance with nature. An architect could be a vital part in this process; preserving and creating meaningful places and spaces, “existential domains”, a built environment for the present and the future, and taking into account the temporal, historical dimensions and contents. There might be no big controversies in widening and deepening the modernistic agenda with the respective corrections and “re-writing”. For the purpose of using and continuing the modernistic tradition and terminology in a new way, we can convert the modernistic phrase “space time and movement” to a concept of ‘space, time and the virtual’.
To summarize: The general concept of the ‘virtual’, used here in the architectural context as a singular concept of ‘space, time and the virtual’, can explain the human spatio-temporal perceiving process, its momentarily endless multitude of spatial phenomena and appearances in the durations of time, its actualizations from the ‘virtual’. By means of the concept of the ‘virtual’, it is possible to open new illuminating aspects to the theoretical questions of architecture and the practical professional work of an architect.