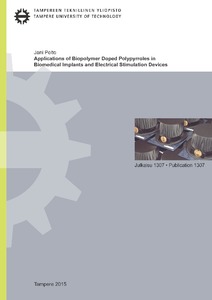 Organic conductive polymers are emerging new materials for biomedical engineering. They offer surface properties which are attractive for many biomedical applications, such as surface coatings on metallic or biodegradable polymeric implants, tissue engineering scaffolds, implantable electronic tissue stimulation devices and microelectromechanical systems for the manipulation of single living cells in vitro, for example. Owing to the proven compatibility with tissues and cells, conductive polypyrrole (PPy) has been intensively investigated for bone and neural stimulation applications. A salient feature of PPy is its easy modification with bioactive molecules and macromolecules, such as the extracellular matrix (ECM) components of animal tissues. This work assessed the ECM components hyaluronic acid (HA) and chondrointin sulfate (CS) as dopants, which we incorporated into the PPy during the syntheses by electrochemical and oxidative chemical polymerization.

Biopolymer doped PPys have been earlier reported to be good substrates for cell cultures. Furthermore, preceding implantation studies have shown promising results. However, considering clinical application and registration of PPy as a biomaterial in commercial cell culturing or tissue engineering products, there are still many practical aspects requiring more attention, such as the establishment of feasible synthetic routes, sterilizability, preservation of the electronic properties during storage and during the incubation in physiological conditions, possible biodegradation mechanisms, stability and biological elimination of the degradation products in vivo, for example. Mass spectroscopy of the hydrolysis products of polylactide (PLA) fibers coated with layer of PPy, suggested that the PPy was biostable in water at neutral pH. Electrical conductivity measurements and Raman spectroscopy showed that the PPy chain was prone to de-doping, and hence the lost its conductivity under biological conditions, but these effects were partly reversible by acid doping and positively biased electrochemical potential. The electrochemical redox activity and electromechanical actuation property of the biopolymer doped PPys was thoroughly studied. It was shown that the biopolymer doped PPy had significant and reversible redox activity, which could be potentially utilized in microelectromechanical stimulation of cells and implantable microscopic actuators.

The physical properties and cell response of HA and CS doped PPys (PPyHA and PPyCS) electrode coatings were investigated by atomic force microscopy (AFM) and electrochemical methods. Drastically different behaviour of adipose stem cells (hASC) was found on the different electrode coatings, highlighting the sensitity of the hASCs on the nanoscopic and microscopic surface properties of the PPy substrate, such as surface roughness, elasticity and surface potential distribution, factors which could be engineered during the synthesis and affected by external stimuli during incubation in cell culture medium.

In conclusion, the resuls of this thesis supported the use of PPy coatings in bone tissue engineering. The electropolymerized films and also the chemically polymerized PPyHA and PPyCS coatings on bioabsorbable polymer were highly compatible with hASCs, supported cell adhesion and could be utilized in delivering direct electrical stimulation in vitro. There is also future potential in designing permanently implantable scaffolds and microstimulation devices, but still further insight into the biodegradation mechanism and biological elimination of PPy in vivo is needed.