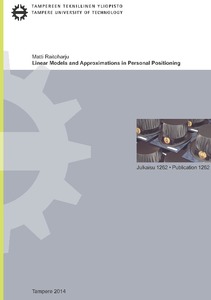 To reduce nonlinearity, the components can be split into smaller components. The main contribution of the first part of the thesis is a novel method for computing the directions of nonlinearity and using this information in splitting a component in such a way that the number of components is minimized while reducing the nonlinearity to a set threshold and approximating the original component well. The applicability of the novel methods introduced in the first part is not restricted to the field of positioning, but they may be applied generally to state estimation with Gaussian Mixture Filters.

In the second part, a different approach for reducing nonlinearity is discussed. Instead of splitting a prior into smaller components to mitigate the effect of nonlinearity, the whole problem is modeled using a linear model. The performance of the linear models compared to nonlinear models is evaluated on three different real-world examples. The linear models are coarser approximations of reality than the nonlinear models, but the results show that in these real world situations they can outperform their nonlinear counterparts.