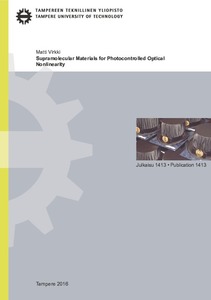 Photonics, the science of light, is driving another technological revolution in the 21st century just as electronics did during the previous one. Many of our current solutions in, for example, telecommunications and information storage already rely on modification of light with matter and vice versa. Still, the ever-increasing need for bandwidth and storage, while keeping the cost and power requirements down, requires continuous eﬀorts in the improvement of existing and creation of new technologies. The development of better materials is at the core of such eﬀorts. Modiﬁcation of optical properties of matter with light brings us to the realm of nonlinear optics. The fact that organic materials have the largest and fastest nonlinear optical response gives us the reason to look into these materials.
This Thesis focuses on the study of new organic materials concepts in the search for nonlinear response that can be turned on and oﬀ at will. The scope of the studied materials extends to supramolecular polymers, small-molecule amorphous matter, and liquid-crystalline polymers. Each of these materials is characterized by relatively strong designed interactions between the constituent molecules, which give them rather unique features, most importantly the capability to resist spontaneous interactions that reduce the nonlinear optical response. Photocontrol of the nonlinear response is reached due to the phototriggered isomerization of azobenzene molecules that are used throughout the Thesis. Purely optical means are applied to realign the azobenzene molecules into an arrangement that enables second-order nonlinear response. As this realignment is fully reversible, the on–oﬀ control of nonlinear response becomes possible.
The results of this Thesis imply that the type and strength of supramolecular interactions in a polymer system have a pronounced effect on the ability to fight against harmful spontaneous interactions. While hydrogen-bonded materials are deemed unsuitable for strong photocontrolled response, the newer halogen bonding concept provides promising results and deserves further studies. Results on a new small-molecule amorphous material combined with a well-known azobenzene molecule with relatively strong nonlinear response hint that this new approach might challenge the polymer systems, which have been extensively studied for a few decades. A conceptually new liquid-crystalline polymer is also developed and its nonlinear response is reversibly controlled by light with an unprecedented contrast of 20. Although the absolute level of nonlinearity in the studied materials is moderate at best, the value of the information gained in this Thesis serves to guide the design strategies when materials applicable in photonics are sought for.