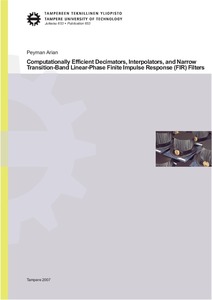 In many digital-filtering applications, it is crucial that the shape of the waveform to be filtered is preserved. This desirable property is owned by a class of digital filters, collectively referred to as linear-phase digital filters.


This work introduces techniques for efficient design of a class of decimators, interpolators and narrow transition-band linear-phase finite impulse response (FIR) filters. Linear-phase one-stage decimators and interpolators are the focus of the first part of the work. The design of this class of digital filters has been addressed as an optimization problem, and an algorithm to solve the problem has been proposed. Next, multiple branch linear-phase decimators have been introduced, and the ideas of a multiple branch design and a one-stage design have been combined to give rise to a hybrid structure. An algorithm leading to an optimum such structure has been proposed, and further constraints have been imposed to yield a structure with the least possible number of multipliers.


The focus of the second part of this work is on the design of narrow transition-band linear-phase FIR filters. The efficiency of the design stems from the fact that infinite impulse response (IIR) filters have been exploited. In essence, the design is a cascade of a stable IIR and an unstable IIR filter. To overcome the adverse effects of roundoff noise, the principle of switching and resetting has been employed. To curb the noise further and to reduce the number of required components, two decomposition schemes has been proposed. The noise generated by the structure has been analyzed in detail, and closed form formulae to measure the noise have been put forward. Finally, the design of this class of filters is addressed as an optimization problem, and a method to find the initial point of the optimizing algorithm is proposed.