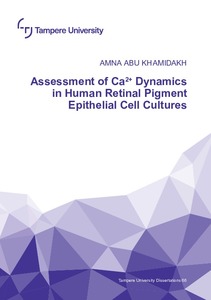 Retinal pigment epithelium is a monolayer of cells located beneath photoreceptors of the retina maintaining their functionality. Malfunction of RPE leads to retinal degenerative diseases, such as age-related macular degeneration and Stargardt disease. Ca2+ is a ubiquitous ion that takes part in regulation of vital cellular processes. The knowledge of Ca2+ dynamics is essential for understanding RPE physiology. This is especially important for functionality assessment of cells intended for transplantation and for drug testing.

The aim of this thesis was to study spontaneous and mechanically induced Ca2+ activity in human RPE and to assess the effect of cellular maturation and wounding on the [Ca2+]i dynamics. For this, various methods, such as fluorescent Ca2+ imaging, immunofluorescence staining, PCR, and mathematical modeling were applied. In addition, novel methods were developed to analyze large amounts of Ca2+ imaging data. ARPE-19 and human embryonic stem cell-derived RPE cells (hESC-RPE) were used as RPE cell models.

In this thesis, it was shown that both ARPE-19 and hESC-RPE exhibit intercellular Ca2+ waves upon mechanical stimulation. With live-cell Ca2+ imaging and mathematical modeling, it was demonstrated that in ARPE-19 cells, the mechanically induced Ca2+ waves propagate intracellularly through gap junctions and extracellularly involving diffusion of a paracrine factor. By applying in-house image analysis tools for the experimental fluorescence time-series, it was found that in hESC-RPE cells, spontaneous [Ca2+]i transients and the ability to propagate intercellular Ca2+ waves upon mechanical stimulation strongly depend on the maturation status of the cells. Finally, it was demonstrated that wounding affects spontaneous Ca2+ activity close to the wound edges, and cells within the healed areas resemble Ca2+ dynamics of immature hESC-RPE.

To conclude, this thesis has provided important insights into human RPE Ca2+ dynamics, as well as into the events of single cell mechanical stimulation and large scale monolayer wounding. In addition, it was demonstrated that maturation drastically affects RPE Ca2+ dynamics. This knowledge and the developed image analysis algorithms contribute to understanding RPE physiology and can facilitate establishment of novel tools for assessment of RPE functionality prior to transplantation and in drug testing assays.