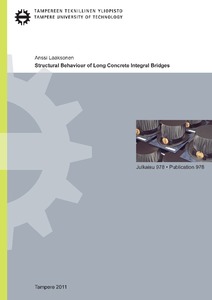 There are more than 20,000 bridges in Finland, of which about 2000 with a sum of span lengths over 20m are actual integral abutment road bridges. The lower building and maintenance costs of integral abutment bridges compared to conventional abutment bridges have increased interest for the former.
This study deals with the structural behaviour of long concrete integral abutment bridges. The bridge subtype was limited to fully integral abutment bridges without any bearings or expansion joints. This study examines structural behaviour from the viewpoint of a bridge designer taking into consideration the effects of soil-structure interaction. It is a part of larger research project called “Soil-Bridge Structure Interaction”.
The main goal was to determine the effects of different soil properties at opposite bridge ends on the structural behaviour of fully integral bridges Another important goal was to determine the maximum allowable total thermal expansion length of a fully integral concrete bridge in terms of structural behaviour of piles at the bridge ends at the climatic conditions of monitored bridges. A further goal was to give suggestions for constructing integral bridges together with the whole research team.
Three bridges, Haavistonjoki Bridge, Myllypuro Overpass and Tekemäjärvenoja Bridge, were monitored during this study. The main focus of the monitoring was the Haavistonjoki Bridge. The instrumentation of Haavistonjoki Bridge on the Tampere-Jyväskylä highway was completed in autumn 2003. Monitoring data have been collected by a total of 191 gauges, of which 98 are still working seven years after the monitoring started. The instru-mentation is used to measure longitudinal abutment movements, abutment rotations, earth pressure behind abutments, superstructure displacements, frost depth, air temperature, and temperature differences in superstructure and approach embankment.
The method for calculating uniform bridge superstructure temperature based on ambient temperature was developed on the basis of monitoring results from the Haavistonjoki Bridge. The temperature was calculated backwards until 1959 with this method. Obtained results correlate very well with the temperature loads of Eurocode EN 1991-1-5.
Structural analyses were run on single laterally loaded composite piles and a whole bridge structure using software based on the finite element method. The analyses on single composite piles used the following variables: pile size and number, corrosion or no corrosion, three different soil properties, hinged or rigid pile top connection. A total of 192 composite FE models including composite piles were analysed. Hyperbolic soil behaviour with hysteresis loops was defined. The lateral displacement capacity of the head of a pile based on the yield strength of structural steel was obtained from these analyses.
Four and six span fully integral bridges with or without a cantilever span and with different pile diameters at the abutments were analysed with whole bridge FE models. They were non-linear quasi-static FE analyses. Reinforced slab, reinforced beam-and-slab and post-tensioned beam-and-slab structures were analysed. A total of 168 bridge models were analysed with various loads according to Finnish guidelines. Soil behaviour was found to be hyperbolic with hysteresis loops in the case of both the laterally loaded pile and the end screen based on literature and monitoring results. The modulus of lateral subgrade reaction was carefully studied in both model types (pile and bridge) to take into account the effect of pile diameter.
The thermal expansion of Haavistonjoki Bridge was not symmetrical. A behaviour model that explains this phenomenon was discovered during the study. The difference in the lateral strength and stiffness of hyperbolic soil behaviour at the integral bridge ends causes eccentric displacements during thermal expansion around the centre of thermal expansion. The phenomenon is taken into account in FE analyses and in suggestions for integral bridge design and construction. The suggestion for the maximum total thermal expansion length of a fully integral bridge was determined on the basis of piles of different size resulting in different maximum lengths. The obtained maximum limit was approximately 120m, and it is based on the structural behaviour of the piles and the integral bridge superstructure. However, there are many factors influencing integral bridge behaviour, which places limitations on research not to mention bridge design and construction. Hence, the suggested 100m limit for the allowable thermal expansion length of this study for bridge design is somewhat less than the ultimate limit defined in this study.