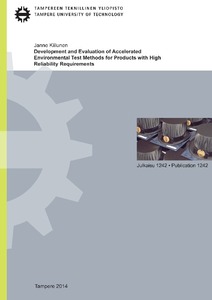 Reliability testing of electronics is performed to ensure that products function as planned in specific conditions for a specified amount of time. This is usually both time-consuming and expensive and therefore test time acceleration is often required. The acceleration may be realized by using more severe stress levels or higher use cycle frequencies, but at the same time the risk increases of inducing failure mechanisms not relevant to the use conditions. As a consequence, the accelerated reliability testing of products with markedly long lifetimes and high reliability is frequently challenging.

In this thesis different methods for test time acceleration for products with high reliability requirements and long service lives were studied. Both standard tests and modifications of these were used. The effect of the accelerated tests used on the failure modes and mechanisms observed was examined and the limitations of the test methods discussed. The research in this work was conducted at both interconnection level and at device level. The interconnection level testing focused on anisotropically conductive adhesive (ACA) flex-on-board (FOB) attachments. In addition to the effect of the curing process on the mechanical strength of ACA FOB attachments, their applicability and long-term performance in industrial applications was studied. According to the real-time resistance measurement the assembly tested was observed to be extremely resilient in thermal cycling and hygrothermal aging. However, a significant decrease in the mechanical strength of the FOB attachment was also seen. Hydrolysis and embrittlement of the flex material was also observed to limit the applicability of harsher hygrothermal aging conditions. Clear ACA joint failures were only observed with moisture condensation testing, but this may not be a suitable test method for applications that are not susceptible to such a stressor.

The device level testing comprised reliability analysis of two frequency converter models. The older generation device and its field failure data were used as the starting point in the development of a test method that could be used to minimize testing time and to induce comparable failure modes to those occurring in the use conditions of the devices. The tests showed that only with the simultaneous use of stresses could a significant reduction in the testing time be achieved. However, the application of the same test method to the newer generation device proved challenging because of differences in materials, components and layouts. Although similar failure modes were observed in both devices, the combined effect of the stresses used on the failure mechanisms requires further study. In addition, knowledge of the service conditions, the environmental stresses and their severity is critical. The main disadvantage of simultaneous stress testing was observed to be the interpretation of the test results, especially due to the complexity of the devices tested. Moreover, the results obtained may be highly application specific. However, regardless of the difficulties in the lifetime estimation, the use of combined stresses was observed to be a practical method to study the weaknesses in a product.