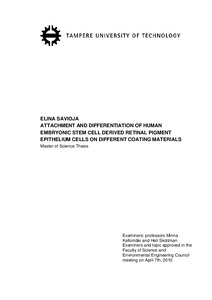 Age-related macular degeneration (AMD) and some other retinal diseases are associated with degeneration of retinal pigment epithelium (RPE) cells. A potential cure could involve cell transplantation therapy using RPE cells differentiated from pluripotent human embryonic stem cells (hESCs). A big challenge is to produce a homogeneous population of hESC-derived RPE (hESC-RPE) cells, and coating materials are one potential alternative to promote the differentiation.

The good attachment of hESCs differentiating towards RPE cells to CELLstart™, collagen IV, and VitroCol™ coatings was a remarkable result, since to my knowledge no publication of hESC differentiation towards RPE cells with a xeno-free coating material and a serum-free culture medium in adherent cell culture exists. Collagen IV can be recommended as a coating material for hESCs differentiating towards RPE cells, since it is cheaper than CELLstart™ and VitroCol™ and easy to use. In the future, the effects of growth factors and other supplements on RPE differentiation could be studied. Collagen IV can also be recommended for Ibidi confocal microscopy wells for hESC-RPE cells, at least for short-term experiments. Longer-term effects should be further studied. BD BioCoat™ collagen IV cell culture inserts can be utilized in research purposes, but they are not optimal since they contain xeno-products. In the future, the ability of bFGF to promote RPE cell cluster distribution and to transdifferentiate RPE cells could be further studied. /Kir10