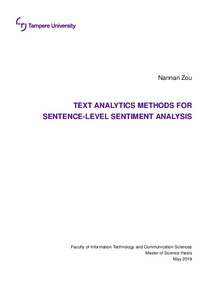 Opinions have important effects on the process of decision making. With the explosion of text information on networks, sentiment analysis, which aims at predicting the opinions of people about specific entities, has become a popular tool to make sense of countless text information. There are multiple approaches for sentence-level sentiment analysis, including machine-learning methods and lexicon-based methods. In this MSc thesis we studied two typical sentiment analysis techniques -- AFINN and RNTN, which are also the representation of lexicon-based and machine-learning methods, respectively.

The assumption of a lexicon-based method is that the sum of sentiment orientation of each word or phrase predicts the contextual sentiment polarity. AFINN is a word list with sentiment strength ranging from -5 to +5, which is constructed with the inclusion of Internet slang and obscene words. With AFINN, we extract sentiment words from sentences and sentiment scores are then assigned to these words. The sentiment of a sentence is aggregated as the sum of scores from all its words.

With the benchmark datasets that cover diverse data sources, we carry out a thorough comparison between AFINN and RNTN. Our results highlight that although RNTN is much more complicated than AFINN, the performance of RNTN is not better than that of AFINN. To some extent, AFINN is more simple, more generic and takes less computation resources than RNTN in sentiment analysis.