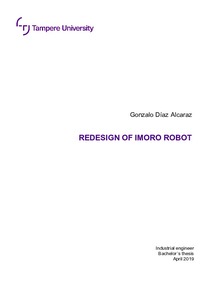 IMoro is a robot in which students and researchers had been working on for more than 10 years. Some thesis and post-doctoral researches have been made about iMoro. This robot is actually in RoboLab, where it can be visited. Students have the freedom to go there and play or work with the different kind of robots, so this thesis is focused to ease this work with iMoro.

This thesis continues the work made by other students and improves the robot as much as possible. To achieve that, a series of improvements, mainly in hardware part, are going to be exposed in this thesis. Some improvements in the software parts will be also made, but only as first step of what can be done.

IMoro is a multidirectional robot with four wheels which can be moved independently forward or backward, and around Z axis. A 6 degree of freedom manipulator is also attached to the plat-form with a tiltable base which can be inclined 45º. The power supply is administrated to the robot with a complex electrical circuit, which automatically switch between the batteries and the charger station. All these mechanisms, in addition to others, will be explained and in detail.

The phases of the development of this thesis involve: compilation of information related to past studies, disassembling the robot to understand its functioning, structuring of a plan for different improvements and implementation of this advances.

The improvements made on iMoro in the Hardware part are: device redistribution, redo of the wiring, creation of a second platform, creation of an external case and creation of a charger sta-tion. On the other hand, in the software part, a user´s manual is started with the steps to connect your personal computer with the onboard computer robot.