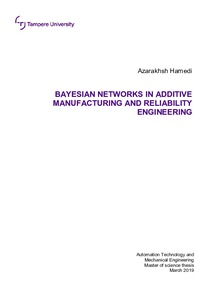 A Bayesian network (BN) is a powerful tool to represent the quantitative and qualitative features of a system in an intuitive yet sophisticated manner. The qualitative aspect is represented with a directed acyclic graph (DAG), depicting dependency relations between the random variables of the system. In a DAG, the variables of the system are shown with a set of nodes and the dependencies between them are shown with a directed edge. A DAG in the Bayesian network can be a causal graph under certain circumstances. The quantitative aspect is the local conditional probabilities associated with each variable, which is a factorization of the joint probability distribution of the variables in the system based on the dependency relation represented in the DAG.
In this study, the benefits of using BNs in reliability engineering and additive manufacturing is investigated. In the case of reliability engineering, there are several methods to create predictive models for reliability features of a system. Predicting the possibility and the time of a possible failure is one of the important tasks in the reliability engineering principle. The quality of the corrective maintenance after each failure is affecting consecutive failure times. If a maintenance task after each failure involves replacing all the components of an equipment, called perfect maintenance, it is considered that the equipment is restored to an “as good as new” (AGAN) condition, and based on that, the consecutive failure times are considered independent. Not only in most of the cases the maintenance is not perfect, but the environment of the equipment and the usage patterns have a significant effect on the consecutive failure times. In this study, this effect is investigated by using Bayesian network structural learning algorithms to learn a BN based on the failure data of an industrial water pump.
In additive manufacturing (AM) field, manufacturing systems are normally a complex combination of multiple components. This complex nature and the associated uncertainties in design and manufacturing parameters in additive manufacturing promotes the need for models that can handle uncertainties and are efficient in calculations. Moreover, the lack of AM knowledge in practitioners is one of the main obstacles for democratizing it. In this study, a method is developed for creating Bayesian network models for AM systems that includes experts’ and domain knowledge.
To form the structure of the model, causal graphs obtained through dimensional analysis conceptual modeling (DACM) framework is used as the DAG for a Bayesian network after some modifications. DACM is a framework for extracting the causal graph and the governing equations between the variables of a complex system. The experts’ knowledge is extracted through a probability assessment process, called the analytical hierarchy process (AHP) and encoded into local probability tables associated with the independent variables of the model. To complete the model, a sampling technique is used along with the governing equations between the intermediate and output variables to obtain the rest of the probability tables.
Such models can be used in many use cases, namely domain knowledge representation, defect prognosis and diagnosis and design space exploration. The qualitative aspect of the model is obtained from the physical phenomena in the system and the quantitative aspect is obtained from the experts’ knowledge, therefore the model can interactively represent the domain and the experts’ knowledge. In prognosis tasks, the probability distribution for the values that an output variable can take is calculated based on the values chosen for the input variables. In diagnosis tasks, the designer can investigate the reason for having a specific value in an output variable among the inputs. Finally, the model can be used to perform design space exploration. The model reduces the design space into a discretized and interactive Bayesian network space which is very convenient for design space exploration.