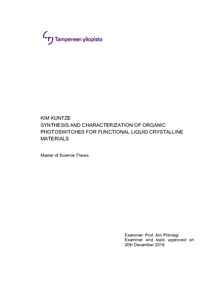 Control over the properties and functionality of catalysts, pharmaceuticals, and materials is an essential objective for contemporary chemists. Light is a particularly attractive remote stimulus due to its clean and highly controllable nature. Thus, organic molecules whose properties can be controlled with light – photoswitches – are widely studied for such purposes. In the case of functional light-responsive materials, photoactuators in particular, liquid crystalline polymers with covalently bound or doped photoswitches are often exploited. The design of new photoswitches is imperative in order to acquire materials with the desired properties. In addition to photochemical properties, it is important to design the materials to be compatible with the liquid crystalline polymer matrix.

In this thesis, four previously unreported photoswitchable molecules were designed and successfully synthesized: azobenzene, diarylethene and indigo crosslinkers, and a donor-acceptor Stenhouse adduct (DASA) dopant. Regarding the azobenzene and diarylethene crosslinkers, the design was derived from already published molecules, the main motivation stemming from the need for truly bistable photoswitches with excellent thermal stability in light-driven robotics applications. Indigo crosslinkers had not been reported previously, so acquiring the crosslinker and exploring its functionality was the main objective; similarly, DASAs have not been utilized in the context of liquid crystals earlier, so the structure was primarily designed to have the best possible liquid crystal compatibility.

The photochemical properties of the photoswitches were studied in solution. Molar absorption coefficients, photoisomerization efficiency and quantum yield, and thermal stability of the more energetic isomer were determined. All molecules showed fast, reversible and efficient photoisomerization with quantum yields similar to published values of related compounds in literature. The azobenzene and diarylethene crosslinkers were found to be thermally stable at room temperature, whereas the indigo crosslinker and the DASA dopant had thermal lifetimes of several minutes. In general, the measured properties matched the aims of the molecular design targeted for.

The azobenzene and diarylethene molecules synthesized in this thesis enable the fabrication of novel bistable photoactuators. The indigo crosslinker and DASA dopant are novel, previously unexplored molecules whose incorporation into suitable liquid crystalline materials can now be studied. Regarding the indigo and DASA switches, the research should be continued with more synthetic studies in order to optimize the reaction conditions. The study on the indigo crosslinker should be further extended to other crosslinkers in order to acquire information on the relationship between the molecular structure and the photoresponsive behavior in an LC material.