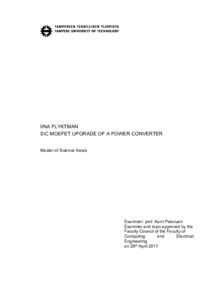 Power semiconductor devices are at the heart of modern power electronics due to their ability to control large amounts of power with relatively low power dissipation. This feature of the semiconductor switches results in efficient power systems. Today the power semiconductor devices are dominated by silicon (Si) technology. However, Si semiconductor switches are approaching their material limitations in terms of blocking voltage, operation temperature, and conduction and switching characteristics. Wide band gap semiconductors, such as silicon carbide (SiC) and gallium nitride (GaN), promise to revolutionize next generation power electronics with their superior material properties. This thesis studies the effects of upgrading a power converter that is designed with Si insulated-gate bipolar transistors (IGBT) with novel SiC metal-oxide-semiconductor field-effect transistors (MOSFET) and if the upgrade is achievable with minor changes on the original power converter. The upgrade is executed for the three-phase active rectifier section of the power converter that also includes power factor correction.

The measurements in this thesis work show promising results that a power converter designed with Si IGBTs can be upgraded with SiC MOSFETs with somewhat small changes on the original design and with moderate workload. The measurements also show that the upgrade is beneficial even at higher switching frequencies. However, more testing, designing, and optimizing is required before the upgraded power converter could be ready for use. It must be considered, if the higher cost of the new switching components and the work hours needed to achieve the complete upgraded power converter are worth the gained efficiency improvements.