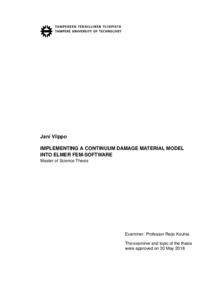 Konetekniikka
This publication is copyrighted. You may download, display and print it for Your own personal use. Commercial use is prohibited.

Quasi-brittle materials like concrete are widely used in the construction industry. The failure of these materials is mainly due to macro- and micro-cracking. Thus the nonlinear behaviour of these materials can be simulated well using Continuum Damage Mechanics approach. CDM utilizes damage state variables which indicate the damaging of the material due to cracking. In order to simulate complex loading scenarios, the continuum damage material model must be solved numerically using Finite Element Method, for instance.

In this thesis an existing continuum damage material model is implemented into an open-source Elmer FEM-software. The chosen material model utilizes second order damage tensor and Ottosen's 4-parameter damage criterion. A comprehensive review of the thermodynamical formulation is performed. Then a program that solves the resulting constitutive equations is developed and implemented into Elmer via its user-defined material model subroutine feature. Lastly some well-known test cases are simulated and results are compared to experimental data found in the literature.

The original material model managed to simulate well some simpler test cases but failed in more general test cases. However, the failure modes were predicted well. The Finite Element-implementation shows good preliminary results. The initial failure modes were predicted well even for complex loading cases. But as the model features rate-independent strain-softening combined with damage formation, the FE-solutions are strongly mesh-dependent and convergence problems occur due to strain localization. Some future improvement possibilities are discussed in order to refine the model into a useful engineering tool.