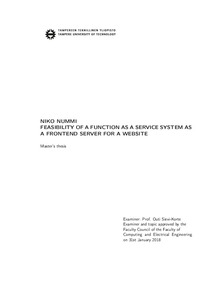 Alma Talent Oy was renewing one of it’s media sites. In this site renewal project whole new tech stack was chosen for the frontend code. Running the site serverlessly in FaaS platform was an attractive possibility.
Function as a service platforms such as Amazon’s AWS Lambda are enabling new ways of thinking and executing code. These services promise to run code in response to events specified by the user. User is billed only when computation in response to an event happens. These services also promise to scale nearly limitlessly in response to amount of requests service is encountering.
These services are also called serverless systems because users do not need to worry about servers. Users have little to no control over servers running users’ code. This is also one of the selling points of FaaS. Only few attributes such as runtime and amount of memory are under users’ control.
New setup with various services from Amazon’s cloud were used to create setup capable of running frontend server in AWS Lambda. This setup was then tested with load tests. Charges relating to the use of this systems were also estimated and then measured when the site went live.
Setup proved successful but more expensive than expected. Main problem cost vice is that the outgoing data is payed twice. From a developers point of view the system is also easy to use and operate.