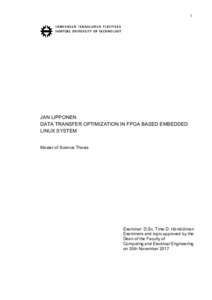 Sähkötekniikka
This publication is copyrighted. You may download, display and print it for Your own personal use. Commercial use is prohibited.

The main goal of this thesis was to optimize the efficiency of data transfer in an FPGA based embedded Linux system. The target system is a part of a radio transceiver application receiving high data rates to an FPGA chip, from where the data is made accessible to a user program using a DMA operation utilizing Linux kernel module. The initial solution, however, used excessive amounts of CPU time to make the kernel module buffered data accessible by the user program. Further optimization of the data transfer was required by upcoming phases of the project.
Two data transfer optimization methods were considered. The first solution would use an architecture enabling the FPGA originating data to be accessed directly from the user program via a data buffer shared with the kernel. The second solution utilized a DMAC (DMA controller) hardware component capable of moving the data from the kernel buffer to the user program. The second choice was later rejected due to high platform dependency on such an implementation.
A working solution, for the shared buffer optimization method, was found by going through Linux memory management related literature. The implemented solution uses the mmap system call function to remap a kernel module allocated data buffer for user program access. To compare the performance of the implemented solution to the initial one, a data transfer test system was implemented. This system enables pre-defined data to be generated in the FPGA with varying data rates. It was shown in the performed tests that the maximum throughput was increased by ~25% (from ~100 MB/s to ~125 MB/s) using the optimized solution. No exact maximum data rates were discovered because of a test data generation related constraint.
The increase in throughput is considered as a significant result for the radio transceiver application. The implemented optimization solution is also expected to be easily portable to any Linux system.