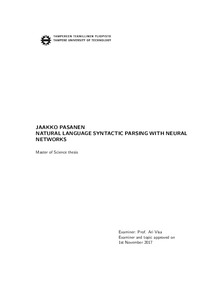 Conversational user interfaces have made strong appearance during the last couple of years. Most growth with conversational UIs can be seen with customer service moving from phone to chat. As big as the hype surrounding the conversational user interfaces is, they often cannot surpass traditional alternatives for the use cases they are used without actually understanding the language user speaks. This has crated a large demand for artificial intelligence (AI) which can understand users in their natural language.

Natural language used by humans is tremendously complex without people actually realizing that. Understanding something this complex often requires system which divides the problem into smaller sub-problems and tries to tackle those, a divide and conquer paradigm. Natural language processing tools are often built as pipelines where more information is mined from the text in each step. Finding syntactic features, such as part of speech and lemma, is one such step, and is the focus of this thesis.

Main objective for this thesis was to build a neural network architecture which can classify lemmas and parts of speech for the input text. Research hypothesis was then to determine if such architecture could be modified to do the both tasks at the same time and if such change would improve classiication performance of the model.

Doing experiments with Finnish Universal Dependencies dataset revealed that lemmatization benefits from jointly learning to POS-tag, but POS-tagging performance could not be improved. Best absolute lemmatization results were gained by using correct POS-tags as input features, but since they are not available for live predictions the result has no practical meaning.