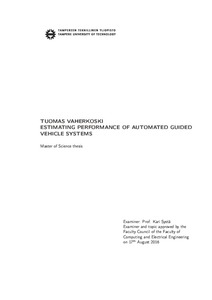 The use of automated guided vehicle (AGV) systems is increasing rapidly in warehouse and manufacturing environments. However, selling and commissioning AGV systems have certain challenges. Especially estimating AGV system performance in early stages of the sales process requires a lot of time and skill. Estimating system performance is important because selling the system for too cheap would not be financially sustainable. Also, a pricey offer will improbably make the deal.
AGV system performance can be estimated using simulation tools. By running the simulation with a different number of vehicles and measuring the throughput, one can decide how many vehicles should be used. Previously Rocla has used a simulator that is slow and difficult to use in the sales process. This Master of Science will introduce a new simulation method that is based on time-window based routing algorithm developed at Rocla.
The new simulator produces an estimate of AGV system performance with different vehicle counts. A proof of concept implementation of the new simulation method was developed to evaluate its accuracy and runtime performance. Its correctness was verified using visualization of the simulation. When comparing the new simulator to the previously used one, the results seem very promising. Both simulator produce similar estimate of the system performance. However, the new method performs significantly better in terms of runtime performance. It cuts the simulation time to less than a minute while previously used method takes multiple hours.