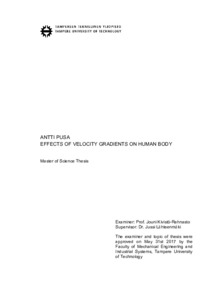 The number of elevators, escalators and moving walks are increasing each year. Respectively, accident rates, such as losing of balance, are increasing. Escalators and inclined moving walks are considered more hazardous than elevators, as the injuries per machine are significantly higher with escalators. For example, in 2007, the number of injuries per escalators were more than 20 times greater than with injuries per elevators in the USA. Falling accidents are e.g. due to velocity gradients: acceleration and deceleration. It has been estimated that approximately 2,5 % of escalator stops result in passenger fall.

This thesis studies the effects of velocity gradients on the human body with elevator, escalator and moving walk applications. The study is a literature review where accident statistics, the most well-known vertical transportation safety standards and several balance studies are analyzed individually and compared with each other. ASME A17.1, EN 81-20, EN 115 and Japanese codes offer safety instructions and limitations on the effects of velocity gradients. However, the limitations are not unanimous as there is diversity from standard to standard and from machine to machine. When elevator standards were analyzed, surprisingly only the deceleration limitations were comprehensively covered and acceleration limitations could not be found in a similar fashion. Limitations on the velocity gradients of escalators and moving walks were comprehensive altogether.

The balance studies reveal that there are multiple factors affecting the human balance, such as the magnitude of external disturbance, age of a person and whether a person is having an external support or not. Sudden changes and the high magnitudes of velocity gradients, such as emergency braking, can have an undesired effect on the balance and the ride comfort. The deceleration is more challenging for the retention of balance than acceleration. Most older adults aged over 65 years have balance problems when the magnitudes of horizontal deceleration exceed 2 m/s2. However, younger adults aged under 40 years are able to manage at the magnitudes of 5 m/s2. The current safety standards limit horizontal deceleration of inclined elevator to 2,46−5,00 m/s2, from which the highest magnitudes might lead to falling of older passenger.

This paper proposes that elevator safety standards should include both acceleration and deceleration limitations comprehensively. In addition, machine design should utilize new solutions in order to improve passenger safety e.g. for emergency braking. An intelligent braking system shows promising results especially with emergency stop of escalator.